From Prof Grumpy.
Posted by Historian on the Edge at 15:05

[Because of the Daily Heil article published today which specifically mentions my department and complains about 'scandalous' low amounts of teaching, I thought I'd move this (originally from 25/06/12) back to the top of the page.

The management of Poppleton University managed to score a spectacular own goal in any case.  All universities have guidelines about not over-running, about finishing before the hour is up to allow students to leave before the next class is due to arrive, and about not starting bang on the hour to allow students with classes some way away to arrive.  Poppleton made the mistake of being honest about this and owning up to the fact that its lecture hour starts at 20 past and ends at 10 past.  Thus, immediately all our hours are reduced by 10 minutes compared with less honest institutions.  Students on my 2nd-year course on 'The end of the Roman World' course receive 17 lectures and 8 1-hour discussion groups, 25 hours in all.  They do 2 such courses a term.  However, thanks to the management's foul-up, these 50 timetabled hours are slashed down to 41 hours and 40 minutes.  Students with the same tuition at, say, UCL, will be classed as receiving 8 hours & 20 minutes (20%) more, although in fact they'll be getting the same.  This, alas, is how the system works...

For students, who like to parrot their parents, who like to parrot journalists, who don't know what they're talking about but who do know how to arrange numbers into a sequence from low to high.  And let's face it it makes good copy; you can always get some rent-a-mouth to make some comment damning humanities 'dons' as lazy - and any defence of the situation can be derided as elitist.

The reason why science students get several times as many contact hours as humanities students is because their degree requires them to be taught different things in different ways.  Let me explain...

If I were to model my teaching on science teaching, it would go like this.  I would give one or two hours of lectures about why a particular book was written, what question it had set out to confront, what conclusions it had come up with and why that mattered, and then telling the students in detail how to read the book.  The student would then get five more hours sitting in a room reading the same book, being supervised by a post-graduate or post-doctoral tutor whilst s/he did so, to see if s/he came up with the same answer as I did.

This, as you can see, is not really what anyone (outside the intellectual drill-régimes of the public schools) would expect of a humanities education.  The science student requires to be taught particular (different) things in ways that require (for intellectual as well as basic health and safety* reasons) different teaching methods and a certain level of supervision, and the aim of the 'experiment' is rather different (at least at this sort of level).  The point of a humanities course is that the student does his/her 'experiments' on his/her own from a range of texts (not necessarily all the same ones) in the library or in his/her room, both before getting the lecturer's thoughts on the overall field and again (and principally) before the seminar where the topics are discussed.  And the point is not necessarily to get the same sort of result as the lecturer.  It is about how to think, not what you need to learn.  Such unsupervised 'experiment' ought - if the student is conscientious - amount to about the same time as the science student spends in labs and doing his/her background reading.


Clarification: Just to avoid any tedious exchanges of e-mails or comments let me make it clear that I am not in any way saying that science is somehow easier, or that it's all just about learning stuff and getting right answers.  What I am saying - and I'm not a scientist so I may be a bit off the mark - is that as I understand it a certain control and supervision of the experimental process and the correctness of procedure is rather more important (or at least important in a different way) in sciences than it is in the Humanities.  I hope you see my general point, whatever its minor infelicities. I have nothing but respect for scientists ... except when they start dabbling in History and standing on their doctoral credentials when they do so, that is.  That, I admit, annoys me.


A related point.  Each contact hour is not the same.  One hour in a lecture with 100 students is not the same as one hour in a group of sixteen students in a seminar, which is not the same as four 15-minute one-to-one sessions.  So totals of hours in league-table format are entirely misleading.  Furthermore, institutions can manipulate these figures.  Our two most prestigious institutions offer huge numbers of lectures a week, each of which they add into the figure for 'contact hours'.  But they are voluntary and only a fraction of students attend.  Their only compulsory hours are the two or three hours (if that) of tutorials.

The whole contact hours issue is a graphic example of how the mantra of 'choice' leads, through the production of league tables, to a lowering of standards.  As I have argued before, the obsession with league tables leads not to a raising of quality but to the generation of more of the sorts of output that, numerically, affect league-table positions.  For instance, 10 hours per week of lectures with 100-200 other students in the lecture theatre is not 'better' than six hours of small group teaching, or three hours of one-to-one teaching (leaving aside the facts that no one gets that any more and my own reservations about the 'inherent quality of tutorials).  But - oh dear - only 6 (or 3) hours a week!  That's not going to look good in the tables.  It won't do, say the university suits when they see that the University of Just Down the Road offers 10 hours (8 hours of lectures and 2 of seminars) a week.  Down comes the directive to increase hours - but how to do so in a way that teaches effectively (students - as above - have to work to prepare for seminars and they only have so many hours in the week) without overloading students or teaching staff?  'We don't want more work, we want more hours', a Poppleton University English student is reported to have said...  The solution: more lectures!  Now - I like lectures (they're what I'm best at) and I don't think they are as useless as many people think, but I'm not going to say they are better for teaching than seminars.

Oh yes.  While we're on the subject of comparison, the reason that science students get more resources than arts/humanities students for their fees is because their tuition costs more.  Before the current government's crazed schemes, the government paid universities three times the subsidy it paid for an arts/humanities student for each science student.  Because they cost more to teach.  That funding difference no longer applies but it is, as it was, wrong to charge students different fees for different subjects (or you'd kill off the sciences for one thing - although for me it matters more that you would simply be penalising students for being interested in one subject rather than another).  And £9k is not very much more than cost price, by the way, once everything is factored in.

Thank you for reading.

---
* For instance, if I set a student to go and read (presumably in her student room) a chapter or two of, say, Chris Wickham's Framing of the Early Middle Ages as part of her preparation for a seminar I can do so safe in the knowledge that the odds of her blowing up the Saint Frithfroth's Street Halls of Residence as a result of misunderstanding one of Wickham's foot-notes range from slim to zero.  This might not be the case with many a chemistry or physics assignment.  I suppose the student might drop Wickham's 990-page tome on her (or someone else's) foot, or head, and suffer consequent injury, but my point is - well you see my point.
Posted by Historian on the Edge at 11:23

Labels: The State We're In

... in rather more important matters, this piece makes important and valuable points, although - typically - many of the commenters have their ears shut.
Posted by Historian on the Edge at 18:46

1: We
A tricky one, this.  Technically regarded as the first person plural, implying a collective subjectivity, its use is in fact much more complex.  Indeed, the meaning can change diametrically according to context.  This can be illustrated no better than with these two well-known examples of common* usage, where the collectivity implicit in the pronoun appears to be emphasised by the addition of the word 'all'.  In fact, though, the meaning is rather more subtle.

A: 'We are all Thatcherites now'.  Here, 'we all' refers to to 'me, my mates and Tony Blair but hardly anyone else.'

B: 'We're all in this together'.  Here, by contrast, the phrase 'we all' actually refers to 'you all', that is to say everyone except me, my mates and Tony Blair, and so is generally referred to at Eton as the rhetorical second person plural.

It is, as I said, a tricky one, in the use of which only an education costing roughly the same as Mexico's national debt can really produce proficiency.  Nonetheless I hope these words provide some help.

[With thanks to my friend Kate for inspiration.]
Posted by Historian on the Edge at 10:40

There were extraordinary scenes today as, in an amazing spontaneous show of emotion that took the political classes by surprise, people across the UK came together as one in showing their grief at the loss of their beloved former leader, a far cry from the quiet, private affair of the funeral itself.

Posted by Historian on the Edge at 20:54

...whether there's anything in this strange constellation of facts.  When Thatcher became Prime Minister she presumed to quote St Francis.  When a pope was elected who took the name of Francis, after the saint, because of his love of the poor, Thatcher was dead within a month.  Some kind of exorcism, perhaps?
Posted by Historian on the Edge at 08:45

On this joyous day in history

Great Lies of Academia no.94

Who's the Patron Saint of 'Epic Fails'?

I got this through the letterbox a few days ago. 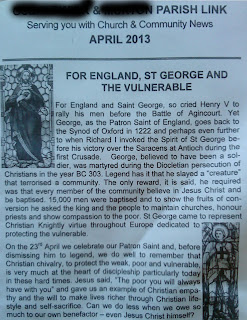 I can be a bit pedantic, as you know.  Nonetheless I don't expect the composer of the average parish church/community newsletter to know that Richard I never fought any battles at Antioch, or that he never went on the First Crusade (which finished 58 years before he was born).  I don't expect them to know the dates of the Emperor Diocletian (or to know that Diocletian was the name of the persecuting emperor rather than an adjective to describe his persecution; it's not clear how our author understands the term).  Or, possibly, to conjugate the verb to slay in less, shall we say, non-normative fashion.

But I do - kind of - expect the reader of a Christian parish church to spot something logically wrong with the statement that a persecution of Christians took place in 303 BC...

P.S.  It's the sentiment that counts, though, and I approve of that.
Posted by Historian on the Edge at 19:42