The non-Puritan roots of the American Right

Here is a very splendid piece putting straight all those politicians and commentaries that claim a link between the allegedly Puritan alleged Founders of the USA and the modern conservative Christian Right.
Posted by Historian on the Edge at 19:18 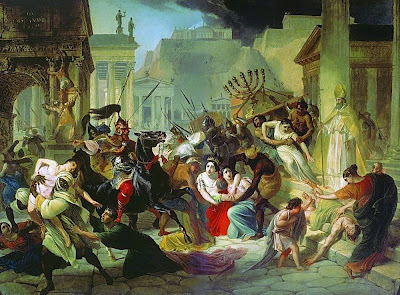 Have a look at this picture.  It is entitled 'Genseric's Invasion of Rome' (Нашествие Гензериха на Рим), painted in 1835-36 by Karl Briullov (1799-1852) and is the property of the Tretyakov Gallery in Moscow.  It is a new one to me and I came across it today as a result of its reproduction in a very interesting article in the American Historical Review: 'Barbarians Ancient and Modern', by Norman Etherington (AHR 116.1, Feb. 2011, pp.31-57: if you have access to JSTOR you can read it here), for which reference I am very grateful to Alex Woolf (although I ought to have known about it before...).


Notice that, although Genseric (or Gaiseric as he appears in my own book) is depicted as fairly 'white' he is nevertheless shown in very Turkish guise (this, after all, is a painting from Tsarist Russia, old, old enemies of the Ottomans): n.b the helmet.  But look, too, at how Gaiseric's warriors are overwhelmingly 'black'.  Not merely 'black', but veiled and black.  Now, it is documented that Gaiseric had Mauri (Moors) in his army when he sacked Rome in 455 but, leaving aside the difficult issue of whether the Moors were 'black' or not, and indeed of whether labels like 'black' and 'white' are applicable to late antique history, these veiled north African Moors are depicted as Muslims (which - obviously - was impossible in 455!).  The veiled North African Moor is an image that dates from the twelfth and thirteenth centuries when the Almoravid Moorish caliphate invaded Spain (fighting Andalusian Muslims and north Spanish Christians alike).  The Almoravids belonged to a particular Muslim sect which prescribed the veil for men as well as women, as a mark of distinction and superior religious purity.  It's more than likely, of course, that Briullov knew nothing of this and just depicted the Moors as he knew them from more recent history, rather than deliberately 'islamicizing' them.  The overall point, though, remains the same.

When one looks at the general 'swarthiness' of even the 'white' Vandals (all darker-skinned than the Romans, especially the fair maidens of the latter), one of whom is wearing a turban, the story told by this picture is clear enough to decipher.  Here, the barbarian 'other', that 'blot' or veil hung to obscure the fatal flaws in the political status quo - pretty necessary in earlier nineteenth-century Russia, ten years after the Decembrist revolt - has been clearly filled in, or inscribed with, 'the Turk'.  Turks with their North African auxiliaries to be precise.  The Vandals attacked Rome from the south and the Turks lay to the south of Moscow, 'the third Rome'.

Obviously, this is just another example of how the barbarian figure has been used to personify the contemporary bogey-man, although quite an interesting one at that.  But, especially when one considers the long history of abuse of the barbarian figure (and how that is very much alive, well and currently, as it happens, inscribed with Turks, Muslims and indeed the veil) it behoves us to think very hard about how we write about the Barbarian Migrations to avoid that inscription.  It does not take a great deal of thought to realise this, which is why I have been so shocked by just how thoughtless - to put it mildly - the products of supposedly elite universities and holders of handsomely-remunerated chairs have been in their writing on the subject: people you'd like, however mistakenly, to think were at least capable of serious thought.  How can one study the Barbarian Migrations and not be aware of the baggage that that accompanies it?  I have also been disappointed - not surprised, but disappointed - to see myself labelled, by the apologists of these people, as the person who made the discussion of the uses of this bit of the past 'tasteless', 'bitter' and, most recently, 'nasty'.*  That depends on the scale of values of the observer.  It is pretty revelatory, nevertheless, and more than slightly disappointing, that the paideia of politically-conservative, supine middle-class academe comes out as more worthy of defence than the modern treatment of immigrants. (A lame defence of politically-supine history can be found here, as indeed can my continuing vilification as The Nasty One).  More on all this anon.