So the trouble-making squirts at the Times Higher have started a Twitter 'hashtag' called 'my worst student'.  Sadly a number of lecturers have responded.  Shame on them.  Many I expect were ever thus.  I do wonder whether some would not normally have responded but for the low morale and the climate of the student-customer which management foists upon us.  The 'rate my professor' culture, the entitlement/consumer culture, the age of thoughtless drive-by feedback born of the faceless internet comments page - I expect that may have caused a few people to lash back, who might not have done otherwise.

What's much nicer is the NUS' response with #mybestlecturer, rather than responding like for like.  Good for them.

I was lucky with my lecturers, almost all of whom I'd happily have mentioned on that hashtag - had we had twitter in those days, rather than a montgolfier balloon to whose anchoring ropes you could tie extra messages as long as they were written on sturdy parchment in suitably neat copperplate.  Sadly some of them are no longer with us (Philip Rahtz, Barrie Dobson passed away a few weeks ago) but I'm glad to say most are.  My undergraduate supervisor gave me all sorts of sound advice that I still regularly pass on, and in time became my PhD supervisor, dedicatee of my collected essays and, I like to think, friend.  If I'm any good as a teacher it's largely because I try and teach like the people who taught me.

As for my best students, I have been very lucky to have taught some brilliant - academically and otherwise - and inspiring people over the past 22 years.  I taught mature students for 11 years who taught me as much as I taught them.  I dedicated my second book to my students - the dedication stands.  I owe them more than they realise.  Since I came back to 'conventional students' I have seen a lot of change - not always for the better - but students are still lively; a good class still gives you a buzz; getting someone to write better essays than they wrote before, and to see and think differently, is still the best thing about the job.  My class of 2006 - my babies as I still call them - still have a place in my heart, but I am especially grateful to my current crop for all the support they gave me, privately and publicly, when the a-holes at the Higher were raking trouble up for me.  They didn't have to.  They're/you're the best.

Posted by Historian on the Edge at 20:14

Dominique Venner: Not a historian

The suicide of Dominique Venner in Notre Dame, shortly after writing a blog post calling for resistance against the law allowing gay marriage in France and leaving a note on the altar, presumably setting out his political justifications, has been reported as the suicide of a 'far right historian' (here).  Let's be clear.  Venner was not an historian.  At least as far as I have been able to ascertain he had no formal academic qualification or accreditation in the discipline.  He was a far right extremist with an interest in weaponry who wrote some populist books about history, to - shall we say - mixed reception.

Once again we see the phenomenon I have discussed before, where anyone with an interest in the past who manages to get a book published is allowed to style him/herself a historian.

Oh, and by the way, good riddance.
Posted by Historian on the Edge at 19:32

Just when you thought he couldn't get any worse...

... this.  Harvard really should fire his ass now.

(Thanks to Steve Sarson for drawing my attention to this piece.)
Posted by Historian on the Edge at 12:27 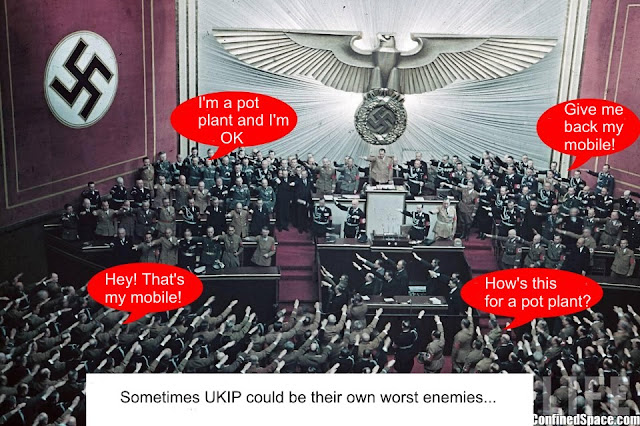 (I'll post something historical and serious soon - promise.  A bit burnt out at the moment.)

For those of you (esp. non-Brits) who need an explanation: http://www.hopenothate.org.uk/news/article/2699/ukip-nigel-farage-defends-candidate-over-alleged-nazi-salute
Posted by Historian on the Edge at 18:59

With hat tip to one Bobby Kuechenmeister
Posted by Historian on the Edge at 14:52