How Clean is your Funding? And does it matter?


(6) Even if I worry sometimes that its dominance in the funding of research might mean that in a generation or so every university historian is working on the history of science and medicine, that the social history of athlete's foot will have become more of a burning issue than major world historical developments...
Posted by Historian on the Edge at 14:08

Richard Drayton, we salute you

With thanks again to JPG for the link, here is something you should watch when you have the time - even if the sound quality is a bit rubbish.  It's the first of four clips.
Historian on the Edge salutes Prof. Drayton for putting his knowledge to fine use in the public good.  It's a great example of living up to the ethical and political demands of being an historian.  The opening section is fabulous.  What's really historical here though is not the simple deployment of facts and figures, effective though that is, but the desire to question the dominant terms of the debate and the 'facts' we are being fed; the lies we are told.  History is not simply about the acquisition of facts.  That's just chronicling or antiquarianism; history is about questioning, critical thinking and investigation.  So, as historians I suppose we'd really need to know more about those graphs, but obviously that was no part of this lecture.
So, I hereby co-opt Prof. Drayton into that motley, rag-tag band of maverick resisters, the H.o.t.E. History Justice League, to which he will bring his economic historical talents and powers of explaining graphs, to set alongside my own highly prized skills of being shouty and offensive.
This sort of thing does really need to be circulated as widely as possible, as it is grounded in what people might call 'economic reality', it has what people might call 'real facts and figures' and as such it exposes the myth behind the ConDem cuts and that their economic 'argument' is indeed just so much ideological eyewash.  They need to respond to this.  Labour needs to make them respond to it, and therein lies the point, made by Johann Hari, that Labour must break its habit of constantly playing within the Tory discursive framework, of being perpetually responsive, of chasing after every hare that the Tories put up.  It needs to forget all that and go on to the attack on terrain of its own choosing.
Here is a little story (as usual, from my military history hobby) by round-about way of an analogy.  After the battle of Balaklava (1854) a British army surgeon was treating a British heavy dragoon with a serious head wound.  Now, the British cavalry was trained with the sword by learning a series of cuts and appropriate parries.  "This is a nasty cut.  How did you come by it?" asked the surgeon.  "Well", replied the trooper, "I had just cut four [which I think is a diagonal cut to the body] and the damn fool didn't parry at all.  He just hit me over the head."
What the Labour Party needs to do is to stop parrying the cuts* according to some Tory/Tory media set of fencing rules, and just hit the buggers over the head! Metaphorically speaking, obviously.
* See what I did there?
Posted by Historian on the Edge at 12:33

I am posting this link to a piece by Johann Hari because I think everyone ought to read it.

The AHRC Saga: It rumbles on

Check this out.  You might not agree with it all, you might find the emboldening of phrases a tad irritating, but it is nevertheless a very interesting, critical reading of the available data, which reaches a sadly plausible conclusion.  What it also does is to move the debate on slightly from the simple question of  whether the AHRC were pressured or not into subtler and frankly more worrying territory (territory that I think many of us had considered).  In this sense the second of the 2 petitions I linked to earlier continues to be the one to support.  Thanks to my mate, James Fraser, for the link.

I guess I am still concerned about where the idea of governmental pressure comes from.  The people quoted in the Observer are no dopes and pretty smart operators, so I'm not quite sure that they can be just skipped over quite as easily as they are here.
Posted by Historian on the Edge at 22:14

Thought for the day 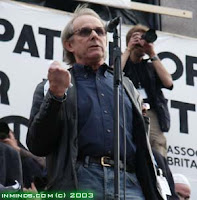 Listen to the Today Programme and you'll start the day in a rage.  That inspires you to fight back, raises the blood pressure and generally gets you moving.

Labels: Thought for the day

This is a nice, thoughtful piece.  Thanks to 'JPG' for the link.
Being me, I particularly liked the following paragraph:


(One detail which should be noted in passing is, yet again, the habitual semi-literacy which seems to be compulsary amongst educational administrators these days. The statement does not, as it says, "refute" the allegations made in the Observer: to refute is to convincingly disprove, and the AHRC offers no evidence to make its case. It merely rejects the allegations, which is a different matter.)

I must admit that I am becoming more and more confused by this whole business.  Indeed I am beginning to wonder if it isn't some sort of elaborate early April Fool's Day jape dreamt up by Cable, Willetts, The Observer and those knock-about, fun-loving pranksters at the AHRC.

To clear all this up, what we need, as Iain Pears implies, is some sort of proof from the AHRC (a time-line of meetings, decisions etc., minutes, and so on) that all this predated the Tory party's invention of the ludicrous notion of the Big Society and some transparency about how it reached the (to me at least) rather dubious conclusion that the issues related to the Big Society were amongst the “highest priorities in the arts and humanities.”

Now, rather tiresomely if I'm honest, someone has (predictably) started a petition.  Here is the link if you can be bothered.  Is it just me or is this race to an e-petition for everything at the drop of a hat weakening the effect of petitions?  I have heard that it has, in that the number of signatures, rather than being taken seriously, is now calibrated against the ease of starting an internet petition.  If I was going to petition anyone about this, I'd want the AHRC to give us some 'facts' (as above) first.  The accusation of political interfering in research funding is very serious, to be sure, but don't we need to be certain that that is what is going on?   The AHRC deny it but I doubt I am the only person who thinks that neither Peter Mandler nor Colin Jones are un-savvy enough to make statements like those in The Observer if there weren't some reason to believe that something untoward was going on.   Indeed I was disappointed in the RHS response to 'Impact' because it was (in my hot-headed view) too savvy and politic.  Prof. Jones isn't likely to use the words 'gross' and 'ignoble' lightly.  So to remove all these suspicions let's see some hard proof.  If this is all a lot of nonsense that shouldn't be too hard to furnish.  And then we can all move on.

As it is, anyone whose application is turned down will at least be able to blame this fact on not being interested enough in The Big Society, rather than facing up to not having put in a good enough application.  I'm not sure that would really be a good thing...

But what we need is a bit of transparency about all this, from some of the people involved, so we know for sure.  Then we can protest properly.  No?

Here is another petition.  I have signed this one as it has something concrete to object to.  Not that it'll make any difference.  500,000 people (1 in 120 of the population) on the streets of London on Saturday has had no effect.  Taking no notice is one of the malign legacies of Blair and New Labour.  Once upon a time, even the Tories had to take notice of the Poll Tax demos. Ho hum.
Posted by Historian on the Edge at 20:35


Just when I thought things couldn't get much worse with this government, on my return to the UK, I hear this.  Words (well, apart from these 137) fail me.  Welcome to Stalinist Britain.  Now, call me stupid (and after last week's shenanigans I'll admit it's a fair cop) but I thought that the whole point of the Big Society (OK, I know it's an absurd idea to start off with but bear with me) was for government to stop meddling and interfering with things.  I will have more to say about this but for now I am, as they say, gob-smacked.  I am in particular wondering what sort of medieval history, let alone medieval history outside Britain, is going to get funded, but there are far bigger issues at stake here than that.  Unbelievable.  This is Britain...

But: Note that today (28th) the AHRC has issued a rebuttal of all this.  Here is the link, and check out 'anonymous'' comment below for an interesting commentary.  What is going on here?
Posted by Historian on the Edge at 19:16

... in a good way!  If you have something you would like to say that is in line with the spirit and interests of this blog, I'm open to 'guest blogs'.  Especially if you have views on the post directly above this one.
Posted by Historian on the Edge at 16:32

More on the 'GAC'

This piece by Matthew Reisz is an old one but it is very interesting, both on the Great Academic Conspiracy and on the threat posed by academics straying out of their home field and into other areas, but still basing their 'truth claim' on their academic titles and affiliations.  Those of us who come up against DNA and Climate Change 'explanations' on a regular basis will be all too familiar with this.  My book on Worlds of Arthur is at least an attempt to do something akin to what Aaronovitch and others say we should be doing.  ... And you gotta love the quote from Richard Evans at the very end.
Posted by Historian on the Edge at 19:18

... summed up horribly accurately in a joke (which I got from my friend Joanna and which is I believe a British version of an American gag, not that that reduces its pertinence):

A banker, a Daily Mail reader and someone on benefits are sitting around a table with twelve biscuits.  The banker takes eleven.  He then leans forward, points at the person receiving benefits and whispers to the Mail-reader "I'd keep your eye on him; he's after your biscuit."
Posted by Historian on the Edge at 14:09

I got myself so tied up in knots on this one, that I have significantly rewritten it.  I hope that this time I have eradicated the errors and inconsistencies...  Fat chance.
Posted by Historian on the Edge at 15:12