The Burning Questions of Lecturing Life

Why is there always one?  Why is there always one wee shite who decides to muck up your feedback returns?  I take my teaching seriously and I take my feedback seriously too.  If the forms all said 'Grumpy is a useless sack of shit who can't teach his way out of a paper bag' I'd be enduring some long dark nights of the soul (well, even more than I do anyway), I can tell you.  Even if they mostly said only marginally nicer things - 'it wasn't bad I suppose but it could have been much better', that sort of thing - I'd be asking myself some pretty searching questions, and our Johnny's gratuitous trolling wouldn't seem so out of place.  Feedback's essential for pointing out (or confirming what you suspected were) things you can be doing better or experiments which didn't go so well, for next time, and that's fine.  I'm all in favour of feedback (within certain limits) to the extent that for some years now (ahead of the rest of my dept) I've carried out interim feedback exercises mid-way through courses to see if there are things I can improve.

As it happens, I just finished teaching a new second-year course.  As my regular reader knows, I've been away for three years on a research fellowship so the students who signed up for this had signed up 'blind'.  Students in my experience are wary about courses with lecturers they don't know, so it wasn't as heavily subscribed as the other courses of the same type and many who were enrolled had not listed it as a first choice (as became clear in feedback, albeit via rather nice comments along the lines of 'this wasn't my first choice but I really enjoyed it').  Additionally I was trying to do something different, to stretch the students a bit, something that upped the intellectual stakes, rather than just being entertaining.  If you just want an amusing 'ho ho, welcome to the crayyy-zee world of late antiquity' lecturing clown to lure first-years away from the Tudors and Hitler and into medieval history, I'm your man but to be honest that's become too easy; it's still fun and I enjoy it lots but it's not a challenge any more.  Trying to develop a second-year lecture course (quite a new phenomenon in the Stuff wot Happened department at Poppleton University) that did something different and required more of the students was a challenge.  Furthermore, before I went off on my fellowship, some of our students (not many but a significant and vocal minority) had shown themselves capable of being pretty strident about hating anything theoretical, anything that wasn't all kings and wars ('proper history') and especially anything that they thought might be 'Marxist' (and I'd told 'em, straight up, in the briefing that I was not a Marxist but that I was a socialist)...  This had also led me to think that 'students today' were all result-obsessed and uninterested in being challenged intellectually.  But I had decided to go full speed ahead and damn the feedback forms.  For all those reasons I was expecting some, shall we say, 'mixed' responses.

So I am chuffed that the responses were overwhelmingly positive.  At 85-89% it may not (if you care about such things) have been numerically the highest score I've ever had (normally I hit the 90s) but, as noted, I wasn't expecting the students necessarily to enjoy the course.  Moreover, the free text comments were generally very favourable.  The most important - and cheeriest - thing to report is that I had been quite wrong in my prognosis of 'students today'.  Given the nature of recruitment (see above) and given that they'd had (in no particular order) Saussure, Barthes, Derrida, Lacan, Gramsci, Žižek, Bourdieu, Giddens and even an off-the-cuff (and possibly wrong) allusion to Heidegger rained on them for ten weeks without warning, the number that reacted positively to mixing history and philosophy, to intellectual stimulation, to being made to get their heads round difficult concepts, and to being challenged, was probably the best Christmas present of all.  Thanks for that!

It wasn't all positive, of course.  Apart from the inevitable stuff that needs tightening up for next time, there was one student who rated the course 2 out of 4 but said the teaching was very good, which I assume means that they didn't much enjoy the subject matter but that it was well-taught.  Fair enough.  To be honest, I'd rather that than a response that said they'd loved the course but that it had been an utter shambles.  I don't think it's clear, to us or the students, whether the overall 'rate this course out of 4' part of the form means 'how much did you enjoy this course?' or 'how well taught was this course?' - and they are quite different questions.  But I digress.

So we come to the inevitable Johnny Troll.  There's always one, the one student who said the lectures were poor, that the philosophy 'detracted from the subject of the course' (ahem, that sort of was the subject of the course), that the VLE* was poor, that the group work was pointless, etc.  Really, what is this about?  When the obvious translation is 'I didn't want to do this course so I have sulked for the past ten weeks; I came to a couple of lectures and didn't understand them; they weren't just telling me what was what, like 1st-year lectures; I expected the VLE to be a list of just what I needed to read; I couldn't be bothered to take part in any group work and let my fellow students down too.'  When it's so out on a limb, so out of step with the rest of the feedback (about lectures, VLE, etc), what is he (and I'd bet a  month's salary, pre-tax, that it was a he) thinking?  OK maybe he's a Billy No-Mates (I kind of hope so, what with me being vindictive and all) and doesn't have any awareness of what his class-mates think.  Maybe he thinks his opinion outweighs all theirs (I wouldn't rule that out either)?  Maybe he thinks my head of department, when he comes to review the feedback, is going to push all the positive forms to one side and say 'Grumpy, this just won't do!  You're fired!'  Maybe he thinks my Head of department will summon a public parade of the University and in a sort of academic re-enactment of the Dreyfus Affair, symbolically smash a chair in front of me and my colleagues and throw the pieces on the ground in front of me, tear up my letter of appointment and throw it on the ground, rip my doctoral gown off my shoulders...  You get the picture.

Nah.  It's none of the above, in my opinion.  In my view, the reason is that he knows what the other burning feedback-related question of lecturing life is.  And it's a big question too, one that applies to every other history lecturer that I've ever spoken to about this.  It is this: why is it this piece of feedback, rather than the 30-odd that went out of their way to say nice things (sometimes wildly, probably equally unjustifiably nice things) about my course - why is it this one response - that has stayed on my mind for the rest of the day?

---
*Virtual Learning Environment: the intranet on which course materials etc are posted.  In my university it is called 'Yorkshare' - see what they did there?

Posted by Historian on the Edge at 09:46

Labels: The State We're In

It's the thought that counts

T-Shirt given to me by my MA students this week (front and back). 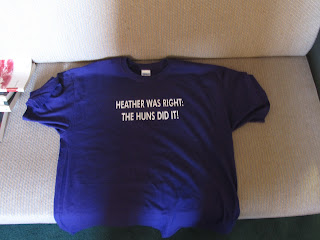 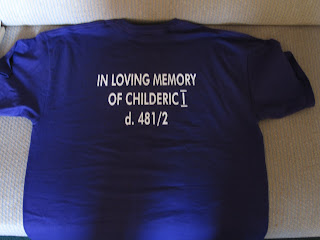 As my partner put it, 'So they bought you a T-Shirt with a critique of your life's work on it?'
Posted by Historian on the Edge at 13:13