Posted by Historian on the Edge at 15:47

[In January I was kindly invited to participate in a small workshop at York entitled 'the academy just isn't funny enough', exploring why humour so often isn't deemed an appropriate (or, if you like, serious) topic for academic research.  I'm not sure my short contribution went down very well, but anyway, here it is, written up.] 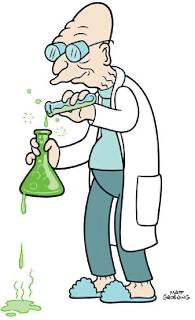 There's an episode of Futurama in which, to lure him to a surprise birthday party, Professor Farnworth's colleagues tell him he has been summoned to a disciplinary hearing.  On receiving the letter, Farnsworth is outraged and says something on the lines of how, if you manage to revive Hitler's brain, you'll get an award but 'put it in the body of a great white shark and suddenly  it's "Oh no: you've gone too far!"'  This seems an appropriate quote with which to start a discussion of humour in history.  There is a very fine line between what we can tell jokes about, or laugh at, before suddenly you've gone too far.  It's not a line, as you know, that I tread with particular aplomb.

A long time ago, I organised a series of sessions on early medieval humour for the International Medieval Congress at Leeds.  Essentially I did this because the year's congress theme, 'priests and bishops' seemed too earnest and, well, boring.  As it turned out, though, the sessions worked very well and became a book.  It wasn't a side-splitter of a book, as indeed I remarked in a foot-note to a remark that explaining jokes robs them of their humour anyway:

Herein lies perhaps the biggest joke of the entire project: putting together a book with the enticing word ‘humour’ in the title and yet filling it with (mostly) dry discussion of largely serious medieval texts.  That joke, dear reader, is on you!

A German reviewer - it would be a German reviewer, wouldn't it? - picked up on this and took me to task for 'insulting [my] readers'!  Leaving aside this marvellous example of the German academy performing its symptoms, the book addressed a series of problems: What was funny back then?  Why?  Can we know why?  Were the things we find funny funny to them?  Can we identify things that were funny but which don't look funny any more?  The source material was unpromising: mostly élite political irony and satire.  Popular humour, where it can be glimpsed, seems pretty nasty.  At Attila the Hun's court, the Huns - here living up to their stereotype - had 'jesters' who were a man with a speech impediment made to make speeches, and a dwarf made to dress up in armour.  The Huns (although not Attila) allegedly found these uproariously hilarious.  After one of many plots against him, Childebert II of Austrasia had the guilty mutilated by having their noses cut off and 'released them to be ridiculed'.  I say, these prisoners have got no nose.  How do they smell?  Etc.  It's a fine line.

Those issues are interesting and important, but what I want to talk about is humour in teaching and in studying the past.  There is a lot of funny stuff in the early middle ages.  It is a period soaked in the Pythonesque or in imagery straight from the Black Adder.  That is a great teaching resource and, as I discovered quite early in my career, a useful mnemonic.  Students can remember points because of jokes attached to them (they can, admittedly, also mangle points because of jokes attached to them but let's let that pass).  But early medieval humour can be pretty edgy.  How does one deal with Carolingians like Charles the Fat, Pippin the Hunchback or Louis the Stammerer?  Or the fact that every time the unpopular emperor Phocas left his palace he was surrounded by crowds chanting 'drunk again!  Pissed out of your mind again!' - suggesting a not especially sympathetic attitude to the problems of alcoholism.

Sometimes the surreal gets a laugh.  The mid-7th-century emperor Constans II moved the imperial court to Syracuse where, after an unsuccessful attempt to retake Rome he reigned for a few years before being battered to death with a soap dish.  This almost always gets a laugh from my students (it didn't from my academic audience when I gave this paper: too soon?) - but why?  It's a horrible thing!

Nonetheless I've always thought it's important to laugh at your topic.  it opens a crucial distance and that can be especially important in teaching the early middle ages, whose alien nature can be a problem for many students.  But in recent years I've become very interested in the politics and ethics that inhere within the historical project.  There is a serious ethical demand at the heart of historical enquiry: an engagement with, a listening to or hearing out of the other person (a formulation which I draw to some extent from Levinas).

So this catches me on the horns of a dilemma.  How can laughing at the past square with an ethical demand of that nature?  Let's compare Constans II with, say, a resistance fighter, hypothetically beaten to death with a soap dish.  Why is one legitimately funny, the other not?  When do things become funny?  Is there a statute of limitations?  I don't believe there is.  Is it more to do with the socio-cultural capital of the victims?  If we transferred the 'joke' to modern or near-contemporary Africa and made it into a central African dictator would it be funnier? [Actually doing this did produce some titters.]  What does that tell us?

I haven't really worked out a way out of this bind.  To the extent that I have one it is based upon Simon Critchley's work on humour.  Critchley argues that the way to cope with and continuing to answer the impossible ethical demand is to laugh at just how ridiculous it all is.  It's a sort of light-hearted take on Camus.  When Sisyphus sees the rock roll back down to the bottom of the slope he laughs.  Miguel Benasayag criticises Camus for standing and watching Sisyphus.  Heaven knows what he'd think of me standing and laughing.

But I'd say I was laughing with not at Sisyphus.  Human endeavour is largely absurd.  Laughter at a component of shared humanity that still recognises difference; laughter as engagement, not complete distancing, and not complete empathy.

What matters, I think, is to ponder the nature of laughing with history.  Not whether to laugh but how to laugh, if we laugh.  For I think that there, rather than having gone too far, it's more the case that we haven't gone far enough.

Posted by Historian on the Edge at 11:26

OUP tell me, today, that a paperback edition of Worlds of Arthur will be published in spring 2014.
Posted by Historian on the Edge at 16:02

... with this.  TV/Radio researchers please take note.
Posted by Historian on the Edge at 16:01

I have uploaded pdf files of the texts of a couple of my more obscure books to my Academia.edu page here* and (for Professor Grumpy's grumpiest tome) here.

* Please note the disclaimer.
Posted by Historian on the Edge at 15:52