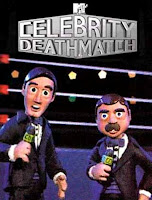 Marc Morris is a writer of history books who cut the mustard in academic history first and is thus one of a select band who deserve to be called 'writer and historian'.  Here he is pithily giving Terry Deary (at very much the opposite end of the spectrum) something of a pasting for his idiotic comments about how public libraries should be closed because they threaten the book trade...  Nice work, Dr Morris.

As the comments-list gets longer, some of the anecdotes and references given do leave you to wonder.  Is Mr Deary curmudgeonly, mischievous, refreshingly disrespectful, or merely a bit of a dick?

By the way, and this is important, if you do really want to support authors (and I admit that there's no especial reason why you should), get books out of the library rather than buying them second hand.  Authors get some money for that; they (obviously) don't get any from 2nd-hand sales.
Posted by Historian on the Edge at 18:07