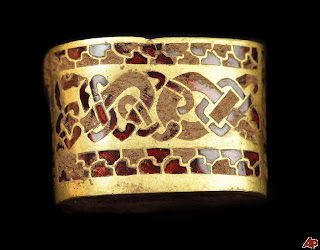 Just came across this, a piece on the Hoard by Jonathan Jarrett (currently of Oxford).

Now, I don't think the comments on the implications for army/battle-size are right.  We just don't know what the size of a kingdom's hearth troop was and to subordinate the implications of the hoard, which contains fittings from 80+ swords - a cold, hard fact - to an assumption drawn from lacunose written sources has to be a methodological mistake.  I think that this would be putting the cart before the horse.  The simple materiality of the hoard has to drive the way we think of generally ill-documented Anglo-Saxon armies, not the other way round.

In fact, the minimalist reading would read this as the loot from one encounter (not that that makes it the reading I'd stick by).  If you work through the logic that sees this as the accumulated loot from many battles you actually end up with much larger Anglo-Saxon armies.  I did this as an exercise and maybe if I can find the file I'll append the reasoning to this post, or edit it to include it.

All that said, I think Jarrett may very well have cracked the whole problem with his suggestion that this represents the gold fittings that a defeated army was forced to strip from its weapons.  I really like this idea and think that it makes more sense of the hoard and its composition than any other explanation that I have heard or read.  It might also make sense of its deposition (as I said before there are two aspects of the hoard: the find itself in context, i.e. the hoard qua hoard; and the individual artefacts that make it up, and their nature): a ritual destruction.  I'm not sure about the latter myself but I have to see it as a definite and intriguing possibility.

Either way, a 'trophy hoard' it still ain't.  (Unless the hoard qua hoard is, itself, a trophy)
Posted by Historian on the Edge at 13:54